There are also Clubs that reflect the diverse interests of our membership and include the following:

Austrian Almas Shrine Club – Check out our Club in Austria.

Ceremonial Cast – This is the group that performs initiations for Almas Shriners.  Bedecked in costumes befitting the Arabian Nights, the Ceremonial Cast puts on a show that you will never forget.

Chanters – Essentially a men’s choir, The Almas Chanters meet once a month to practice music.  They participate in some of the more formal setting at Almas Shriners such as initiations of new members, memorial events, installations, and parades.

Knights of Mecca – Occasionally a need arises when a Masonic Lodge needs assistance in performing some of their ceremonies.  The Knights of Mecca stand ready to help upon request, whether it is in Maryland or the District of Columbia, their members are proficient in whatever is required.

Latin Club – The Latin Club has shown the spirit and culture of the Hispanic Community in our Nation’s Capital.  Their annual Hispanic Heritage Night is filled with dancing to music with a South American flair as well as a good sampling of food specialties from South of the Border.

Shepherds – The heart and soul of Almas Shriners, the Shepherds are charged with carrying out our noble purpose of transporting patients to and from the Shriners Hospital for Children in Philadelphia or to and from airports in order for the patients to travel to burn centers at Shriners Hospitals either in Boston or Cincinnati.  The Shepherds command a fleet of vans, including one which is wheel chair accessible.  These vans are in constant use on an almost daily basis.  The maintenance of the fleet of vans as well as the cost of transportation is funded through a charitable fund called the Almas Transportation Fund (click on this link to learn how you too can help in this noble cause).

Uruguay Club – The need for the kind of care that Shriners offers is universal and Masons in Uruguay, have joined together to form the Almas Uruguay Shrine Club.  Being part of the only Shrine Temple in the Nation’s Capital offers them added prestige and it is their hope that they can learn the medical care model that Shriners offers, train local doctors in the methods Shriners Hospital Doctors use and one day open a hospital in Uruguay to offer the care for the children of South America.

Yacht Club – A seafaring group of Shriners, the Almas Yacht Club is as active a club as any at Almas.  Meeting once a month for dinner and social event, the Yacht Club has such nautical events such as a Changing of the Watch and Winter Cruise.  Members ar expected to be in uniforms similar to Navy Whites, but with a fez. 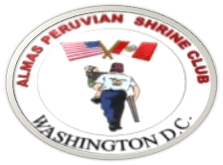 The Club was chartered in 2009 and includes many members of the Peruvian Community in our area.

Almas Shriners also supports Samla Temple, Daughters of the Nile who meet regularly at our Shrine Center and raise funds to support the Shriners Hospitals for Children.